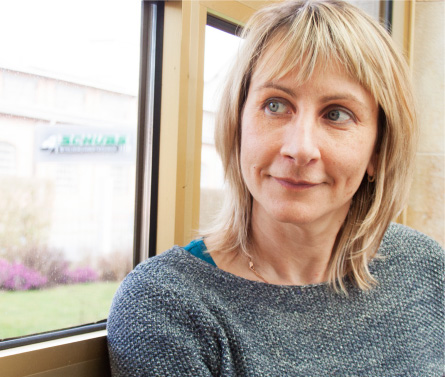 Lena was born in Ukraine. There she had to learn early on what it means to live in insecurity. The many political and economic upheavals caused by the Soviet era still characterize the country today. At the age of 25, as a fresh graduate of electrical engineering, there was no perspective for Lena. Without housing, work and money, she and her husband made the big decision to go to Germany. An exit from Ukraine had to be approved. They never calculated that their application would be granted without complications. But already after half a year she and her husband held the permission for their departure in their hands. “That was a shock at first,” says Lena and her gaze wanders into the distance for a brief moment, as if the memory comes back to life. Initial fears quickly replace the anticipation and hope for a promising future.

They use the half year until their departure for a German language course. Then the few belongings were packed into two suitcases. They invested their last Ukrainian money in Germany in a taxi ride from the train station to the collection point for refugees.

At first the euphoria and carelessness prevailed. They were provided with everything they needed to live, even a small pocket money. Nevertheless, the two soon wanted to build up an independent life of their own.

By chance, an initiative for women academics from Eastern Europe was launched at exactly the same time. Unfortunately, her degree is not recognised in Germany. Only 30 women were selected to take part in a one-year vocational integration measure. The course was concluded with a company internship. People were so satisfied with Lena that she was offered a training place afterwards. After the training Lena worked for another year before she became a mother for the first time. She took a two-year parental leave.